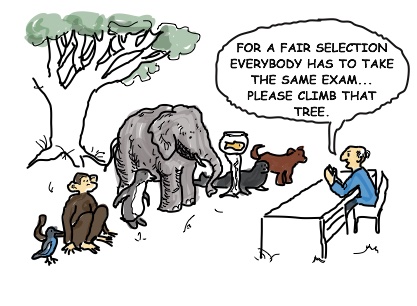 “Everybody is a genius. But if you judge a fish by its ability to climb a tree, it will live its whole life believing that it is stupid.” – Albert Einstein

Whether or not Einstein truly spoke these words, the idea that different people learn in different ways is by no means a new idea.

Dr. Howard Gardner, a Professor of Education at Harvard University, presented his Theory of Multiple Intelligences over 30 years ago. In a nutshell, Gardner challenges the standard view of intellect: That a person either is, or is not intelligent, and that intelligence can be adequately measured by IQ tests (something Mr. Einstein would surely disagree with!) Gardner argues that IQ tests typically assess linguistic and logical-mathematical intelligence; and that they “were a reasonably good predictor of who would do well in a 20th (note: Not necessarily a 21st) century secular school.” On the other hand, Gardner’s theory proposes that there are at least nine types of intelligences and that each individual has their own unique configuration of intelligences (i.e. capabilities and skills).

In terms of implications for education, Gardner believes that we should teach/mentor/nurture individuals in ways that they can learn (i.e. personalize).

Individualizing education may sound great in theory, but is it realistic?

We happen to think so.  In fact, it’s called the Montessori Method… and it’s been in practice for more than a century.

As Montessori celebrates it’s 110th anniversary, it’s interesting to note that Dr. Montessori’s philosophy on learning is just as powerful and true today, as it was in the early 20th century.  Yes. Times have changed. The demands of the 21st century are different, and so parents (and educators) need to ask themselves: Will the conventional approach to education truly unleash our children’s potential for maximum success in today’s world?

For those of us who tend to be ‘visually inclined’, here’s a link to a video that does a nice job of summarizing the difference between a Montessori and Conventional education.

Many years ago, I needed to decide whether I should have my son, who was going to turn three the next September, educated in… Read More

Soon after my decision, I realized that the selection of Montessori education was just the start, because each Montessori school is different and my… Read More